The Effect of Animation on Game Usability

I wrote my Master of Science thesis on the effect animation might have on usability of digital games. I promised to my research subjects (I like to call the subjects, yeah) I'd write a small summary of the research findings and statistics of the questionnaire used in the study, so here goes. I have removed most of the boring theory from this summary. If you're interested in it and you understand Finnish, feel free to download the full pdf from the bottom of the page.

Another good reason for taking advantage of animation is that it's constantly present in (modern) games: in player characters, in monsters, environment, everywhere. Since you already have animation in your game, why not use it to make the game more usable? Now, I'm not saying that animation should no be used purely for entertainment or artistic purposes, but it's important to be aware of your options. Plus of course animation is way more interesting than plain text, which adds to immersion and simply makes the game more fun.

The thesis' purpose was to build some sort of basic model of animation's possible usability effect. It can be used by game designers and artists as a source of inspiration or a sort of heuristics style "checklist" during the development process.

The concept of usability in games is kind of a paradox: a game that is extremely usable would be an awful game ("Press A to complete game"). Game designers create obstacles and problems into the player's way, deliberately decreasing its usability. Usability in sense of game design must be viewed from an angle different from the traditional efficiency oriented software development. One typical weirdness is that in games the players are expected to make mistakes - a game without mistakes would be a game without a challenge, which would be rather boring.

When working on game usability, one should always consider the purpose of the game and direct usability testing in a way that supports that purpose. In most cases it means directing usability testing to those areas that require very little thinking, such as controls, map views or game status in general. That way the player may concentrate on playing the game rather than having to constantly ponder how to play the game. On the other hand, if the purpose of the game is to be a realistic simulator, simplifying controls would work against the game design purpose, even tho it increases usability. To put it short, you have to put game design before usability.

How to Use Animation

So, in which ways does animation possibly improve game usability? I divided possible uses for animation into three main categories, as proposed by Chuck Clanton back in '98. The categories are:

All the proposed usages and their summaries are listed in a table below (well, a couple of scrolls below).

User interface is the visible part of game status information, typically displaying score, health, progress... you know, the boring but vital stuff. Animation can be used here very much in the same fashion as with desktop applications: to display that information more effectively. This can be done by saving screen space by using temporal dimension (like with weather forecasts that show simulation of the next 24 hours) or by reducing cognitive load, so that the player doesn't have to decode the symbols used in the game. A basic example would be using an object that moves from left to right rather than displaying an icon that has a running man or an arrow that points to right.

The interesting part, tho, is using animation to enhance immersion by placing UI elements inside the game world itself. Animation often fits to game worlds better than text and numbers, making it more natural and less intrusive way to display user interface elements.

Game mechanics includes all the things the player sees happening inside the game world, be it jumping, running, fighting or movement of a car. This part is where animation has most of its potential, as most of the game mechanics have to be animated anyway. It's just a matter of doing it so that it carries the right message. Animation can be for example used to display game state or affordance, give feedback, demonstrate game events - all very traditional concepts in usability. Also, as mentioned before, animation is very easy to "understand", which increases its usefulness even more.

One of the biggest hitters is displaying game state and affordance. Animation can be used to display varied information in the game world in a fashion that is easy to interpret and doesn't break immersion. Say, your character has a knee injury and can't run. Instead of displaying a red cross icon on his leg and some sort of textual note about decreased speed, you could just make the character limp and stumble when the player selects the action for running. In the same manner animation display affordance, or the lack of it, by hinting certain actions are possible or not available. In the case of the limping character, jumping for instance, does not seem possible. One good example of using animation to display causality is Prince of Persia game, in which sloped platforms have sand constantly falling off them. The falling sand confirms that the platform actually is sloped, and also hints that the player might fall off from it, should he try jumping on it.

Human senses have evolved into detecting moving objects. Noticing a running rabbit in the middle of a forest or an attacking lion at the corner of your eye could be a matter of life and death back in the old days. Detection of movement happens in very early level of the human visual system, making it immediate and economic from cognitive point of view. For this reason animation, or any sort of moving images, is very useful for drawing user's attention, especially in peripheral vision.

Gameplay is the deep stuff of games. The stuff that makes the game interesting and in general makes the game a... game. While gameplay has no straightforward usability effect, it is extremely important for the user experience of the game, playing its own part in the strange game usability concept.

The most obvious use for animation here is pure entertainment. Animation is in general perceived much more entertaining than text or still images. Animation can also be used to motivate the player and it isn't unusual to find small rewarding animations in games. The Sims serie for instance has lots of small animations used a rewarding. The interesting part in Sims' use of animation is that the animation rewards are used also for negative effects, which further encourages the player to experiment with the game and toy around with its functions. Finally, animation may be used to create an emotive response in the player. While this is of course way more harder than simply adding some animation, games are often played for their emotive effect and animation offers a natural way to communicate the desired message.

Taking It to Practise

To see if the theory summarised above has anything to do with practise, I made a small game that tests the theory. Players played (randomly) either an animated or non-animated version of the game (50/50 share) and were asked to answer certain questions regarding the game and its usability. The game also recorded some in-game data, such as final score and the first occurence of damage. The total amount of people participating in the study was 470. Most of the research subjects were 15 to 35 years old and played digital games almost daily. Only 10% of the subjects were female, probably because the research was advertised in internet game forums that often tend to have hardcore male gamers.

The game is a side scrolling 2D game in which the player is controlling a bicycle'o'copter. The player may move left and right, tho the main gameplay comes from having to control the amount of power put into the copter - too much power makes the player hit the "ceiling" while too little lift takes the copter to ground.

Play the game here (no research data is saved). 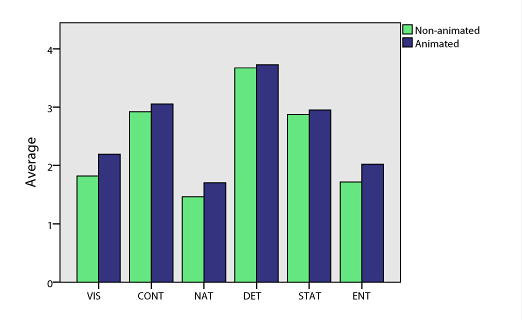 I'll skip the numeric details, as the goal of the research never was to have any "mathematical proof" for the theory. The research shows that the animated version did better in all measured variables. Animation especially made player movement feel more natural and, less surprisingly, in general increased the visual appeal of the game. Animation also made the game more entertaining. The players of the animated version also had their first collision (hitting ceiling or ground) approximately 38% (~5 seconds) later, suggesting that animation helped the players to get a grip of the game idea during its first second.

Thanks for reading! Should you have any comments, feel free to drop me a note to markus@heiolenmarkus.com.

Play the game
You can still play the game, but no research data will be saved.